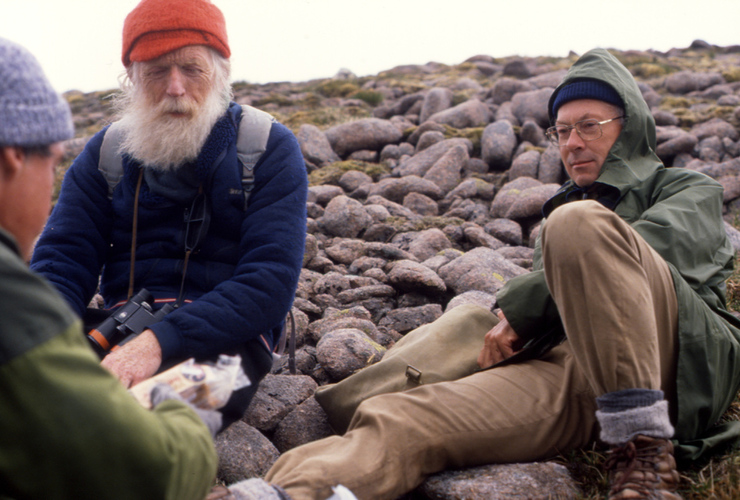 The John Muir Trust has paid tribute to renowned Scottish scientist Dr Adam Watson who died on Wednesday at the age of 88.  Dr Watson, who enjoyed an international reputation in the field of mountain ecology, played a key role in the Trust for almost 20 years.

Born in Aberdeenshire in 1930, Dr Watson published more than 30 books and 300 other research publications based on fieldwork carried out in his beloved Cairngorms, where he spent most of his life.  His research covered an exceptionally wide range of research subjects from grouse, ptarmigan, and eagles, through pinewoods and deer to snow-beds, ski-fields and footpaths.

Dr Watson was one of only six people who have been honoured with a John Muir Trust Lifetime Achievement Award, in recognition of his pioneering scientific writing and research, his mountaineering achievements, and his sustained and dedicated campaigning to protect and restore the wild nature and landscapes of the Cairngorms in the spirit of John Muir.

Andrew Bachell, Chief Executive of the John Muir Trust said: “I have fond memories of being taken out into the Cairngorms many years ago with Adam Watson and the late Dick Balharry, another legendary mountain expert. Adam has left us a precious legacy in his extensive writings illuminating the ecology of the Cairngorms and enriching our understanding of Scotland’s mountain environment.”

The two surviving co-founders of the Trust, Denis Mollison and Nigel Hawkins, paid tribute to the role played by Dr Watson in developing  the charity into an authoritative voice for Scotland’s wild places.

Denis said: “When we were recruiting our first trustees, there were two we regarded as essential, for the complementary values they represented and the authority with which they could speak on them: the late Bill Murray – whose focus was on people and the wild – and Adam for his eloquent and uncompromising commitment to the intrinsic qualities of wildness.”

“Nigel and I made a memorable - and successful - triangular winter journey in 1984 visiting them both, and paying homage with a moonlight ascent of two Cairngorm Munros in between meeting both men. Adam remained a trustee for 13 years – and an honorary adviser for a further six years – helping develop our policies as well as presenting a vision for how land should be managed, which had a major influence in shaping the future of what is now the Cairngorms National Park.”

Nigel Hawkins added: “Adam was affectionately known to us as ‘Mr Cairngorms’ for his unparalleled expertise on this iconic part of the Highlands. He was also a campaigner par excellence who understood the importance of valuing and safeguarding protecting the Cairngorms for the benefit of both nature and people. He inspired in others a deep love, affection and true understanding of the unique and special qualities of the mountains of Scotland.”