Davie Black, Access and Conservation Officer at Mountaineering Scotland, looks at the latest at Glen Etive 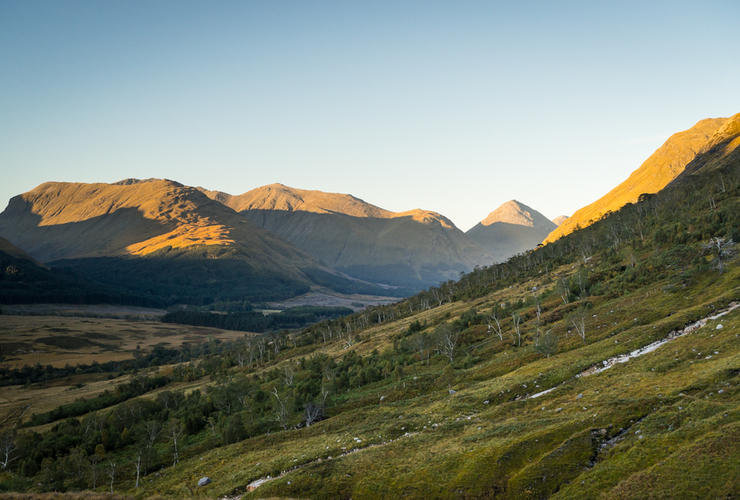 In March 2019 the John Muir Trust expressed its disappointment at the decision to approve three run of the river hydro schemes along Glen Etive; warning that Scotland’s wild places are being diminished in pursuit of private profit.

The Trust had previously objected to three of seven applications in the glen: because of the individual impact of  each on wild land as well as the cumulative impact of them all on a popular and accessible scenic landscape. Several other organisations and individuals also raised objections. Among them, Mountaineering Scotland also focussed its attention on the three proposed developments on the east side of the glen.

Eight months on from the decision by the Highland Council to grant permission for all seven schemes, Access and Conservation Officer at Mountaineering Scotland Davie Black shares an update.

"The proposals earlier this year for seven run-of-river hydropower schemes in Glen Etive brought to a head the impact of this technology on mountain landscapes. Mountaineering Scotland accepted that four of the schemes on the west side of the glen could, with care, be accommodated without causing loss of landscape value.

"The remaining three, on the east side of the glen, were seen as a step too far for many outdoor enthusiasts; heavy engineering works in a scenic and wild landscape, and popular for walkers and climbers heading up to the tops and ridges, were out of place here. Mountaineering Scotland objected to them as being far too intrusive for a National Scenic Area and a part of the glen identified for its wild land qualities.

"That was in March. We are now months further on, yet the developer for the schemes has not convinced SEPA, the environmental regulator, that the proposals for some of the schemes can be constructed in line with the conditions set out in the planning permission.

"SEPA officials visited three of the seven locations in early June, two on the west side of the glen, and one on the east, and found some fault with all three of them, but especially so on the Allt Chaorainn proposal. Some very damning comments were made on the current construction proposals, most especially on the: 'contractors' views that it was not technically possible to construct the site in line with the conditions outlined in the consent.'

"This observation casts a very bright light on the problems that Scotland’s planning system has – consent was given for engineering works which the actual engineers say cannot be done without damaging the environment that the planning conditions were set to protect.

"Only one of the three schemes on the east side, the wild and scenic side of the glen, was visited so we can only speculate how the projects for the Allt Ceitlein and the Allt Mheuran can be constructed without similarly breaching planning conditions.

"Generally, the restoration of the land after excavation and construction is highly problematic with SEPA indicating that watercourses must be restored to flow over the buried pipelines, not culverted under, and that usable turfs are limited at these locations.

"Thin soils and exposed bedrock are just not suited to the construction methods currently proposed, and this amply demonstrates how inappropriate these intrusive engineering projects are for this landscape.

"We say to the developer, Dickins Hydro Resources: admit that they got it wrong and over-reached themselves with the three schemes in the wild land; and forgo damaging the hillside on the east side of the glen with purely speculative engineering works.

"This is not low-carbon, renewable power that touches lightly on the land. It is better to live within the environmental limits of the landscape and accept the four projects on the west side of the glen, than push on to try and try to extract limited power from a technically difficult landscape without ruining the value of the place."