Interview: Nick Hayes on The Book of Trespass 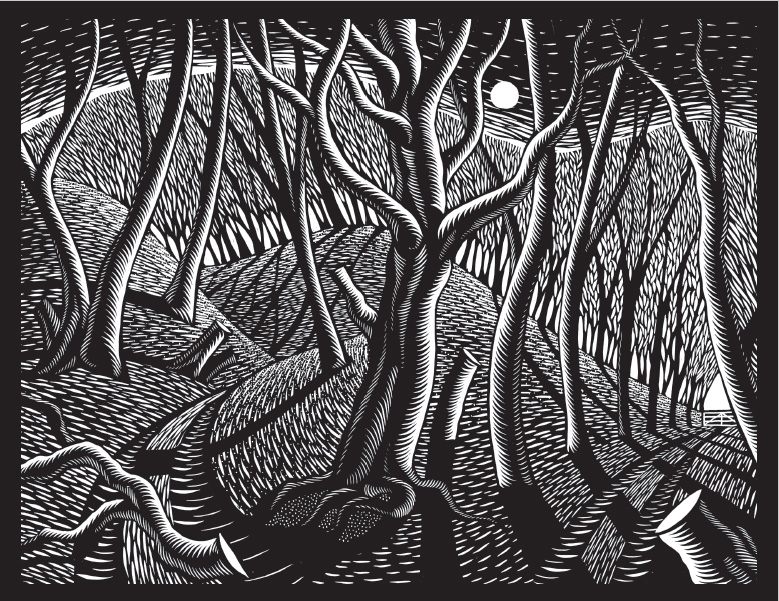 What was the impetus for The Book of Trespass? Was there a single incident that sparked the idea, or was it something more gradual?

I grew up in the countryside, on the border of Oxford and West Berkshire, a bike ride from the Thames. I spent a lot of my time walking with my sketchbook, and often cut across loose barbed wire to find the perfect scene to draw. Over time, as more farmers and gamekeepers questioned my presence, I realised there was something systemic happening. I felt criminalised for simply sitting at the base of a tree and drawing the valley before me.

But it was only when I was thrown out of a first-class carriage on a packed train to London, that I decided to write a book about it. It was a perfect analogy for land access in England. The second-class carriage was packed with commuters, shoulder to shoulder, not an inch of space. But the first class was two carriages, empty except for a couple. When they called the guard to evict me, I realised how accustomed I was to the orthodoxy that those with wealth can afford the right to exclude those without. So, I started looking into just how much space in England was off limits to the public. I began to look into the history of trespass, and where our exclusion from the landscape came from, and what possible justification it could have.

Are you interested in challenging patterns of historical land ownership and private property per se, or more about questioning the rights to enclose and exclude that come with that?

The Book of Trespass uses the act of trespassing to step into the private, unacknowledged history of land enclosure in England. Ultimately, there can be no discussion of trespass without a history of the privatisation of common land and commonwealth, without talking about other issues in the Land Rights agenda, such as Land Value Tax or a community's right to buy. When Scotland passed the Land Reform Act in 2003, it opened up the majority of land and water to public access, but it also created a structure for a community's right to purchase land in common ownership. So the issue of access and ownership are intrinsically linked. But the book, and our adjoining campaign, are concentrating simply on access because in terms of the medical health crises our nation is facing, it is in our opinion the most urgent issue.

Tell us more about the campaign. In what ways are improved access to land, and mental and physical health and wellbeing linked for you?

The campaign is called Right To Roam and we are looking for everyone to join in! We want to expand the right to roam over four main terrains in England; rivers, woodland, green belt and down land.

We think these terrains offer the best health benefits to the most amount of people. England is suffering from a medical health crisis, from respiratory disease, heart disease and obesity, to chronic anxiety and depression. There is now a strong body of evidence to prove what our bodies have known all along - that in mind, body and soul, nature can help heal us. People need the right to access the land around them, so that nature can become part of their daily lives.

The book was written before Covid-19 and lockdown - how has that new, heightened context has changed the experience of access in England in general, but also for specific communities who have experienced lockdown differently?

I think now more than ever, the link between social justice and access to open space has been felt on a visceral level. During lockdown, those with access to space - whether back garden or hillside - were undeniably more privileged than those locked down in inner city areas. People were more aware than ever how desperately our bodies need to be outside and subsequently how unfair the division of land and space is in our country. The Sunday Times found that if golf courses were opened to the English public, one million people would have easy access to open space. Pictures trended on Twitter of aerial shots of towns, houses and roads, squashed around hundreds of acres of wooded golf courses, wide open space that the people were banned from.

The easing of lockdown also brought to the fore the issue of litter and vandalism. However, with the government only spending £2,000 a year on publicising the countryside code, it is unsurprising that some have forgotten their link to nature, and how important it is to act responsibility. The easing of lockdown brought a new visitor to the countryside, one seeking an alternative to pub and club culture. But now, as a result, more sites have been closed, punishing the wider public for the actions of an undereducated few.

How do you think we have internalised the rules of trespass over centuries?

Chapter 4 of my book looks at how trespass became viewed as not just a breach of common law, but an immoral act. The alarming link between the church and state in the 15th century has something to do with this, but the fact that every law created up until the reformation of parliament was enacted and debated by a cabal of large landowners has also had an effect. Up until 1832, you could only qualify to be an MP if you owned substantial land holdings. The entire architecture of law was constructed with a bias toward land holders, even though historically most of the population have owned very little, if any land at all.

We look at a wall in nature as if it possesses an authority, as if our exclusion is justified. But just a quick breeze through the history of how it came to be built, and a catalogue of exploitation, dispossession and community division entirely undermines the wall's legitimacy.

How do you think those ancient rules have been commodified in our modern society and to what end?

The Georgian era saw the wholesale commodification of rights to land. With the public exclusion from common ground, came the privatisation of hunting rights, wood collecting, foraging, grazing rights, riparian rights (now sold as fishing rights). It is basic rentier capitalism - enclose a resource and then rent the right to use it back to those who can afford it. These days, the pop culture of music festivals (once free Sabbats and fetes on the common ground) or even the commercialism of forest bathing (taking a walk in woods to soak up the essential oils of trees) demonstrate how every aspect of our connection to nature has been forced through a prism of rentier capitalism - you can have it, but only if you can afford it. This of course links to a more general acceptance of a neo-liberal ideology, but its roots are in land.

What practical steps can people take (without necessarily getting arrested!) to take down those physical and psychological barriers?

We would ask you very simply to join our campaign and offer us what experience and expertise you have. We are not pretending we have all the answers, we are simply trying to raise the issue, and change the debate. There is something in the air right now, a zeitgeist towards a greater understanding of our connection to land, the earth, the planet, and this campaign is the first step to a more equal share of the wealth and health value that should be available to all.

In Scotland, the right to roam aims to balance rights with responsibilities – would you like to see the Countryside Code evolving in England, and if so how?

Every nation in Europe with a Right to Roam has, at its core, the notion of a greater responsibility to nature. We want to work with farmers and land holders to find an agreeable way to shore up a public responsibility to nature. But to be really effective, this connection with nature must be forged first in childhood. Children need to be able to explore in nature, to learn about flora and fauna by experiencing it in the flesh.

You've said that "rivers are your heart and soul" and the right to roam campaign aims to extend access into blue space as well as woodlands and moors. What is it about rivers that helps you connect, personally?

In England the public has access rights to only three per cent of rivers in England. If you’re paddling, swimming, or toe-dipping in an English river, there a 97 per cent chance you’re breaking the law. Our inadequate rights to rivers express the wider issue of inequality in the land in its starkest, most striking manner.

A friend of mine was just thrown off the River Lodden, whilst playing with her three-year-old child. She had been returning to this specific spot for five years, it was a place that she cherished. However, one visit from a fishing bailiff evicted her, and she hasn’t dared to return. She investigated the details, and a fishing club rent the rights to five miles of that river, the closest stretch to Basingstoke, her hometown. No more than 85 fishermen (most of whom live outside of the country) have exclusive rights to access the river, while the 110,000 residents of Basingstoke have no rights whatsoever. They see the river as it comes out from beneath the shopping centre, a trickle, and that is it. There is nowhere along that 28-mile river, except for one small section by Winnersh, that the public have any rights to.

I am a swimmer and a kayaker, I live on a boat on the Kennet, but most of all, I am a drawer of the river. I cannot get enough of it! Rivers brim with nature and cut through country and city alike. They are worlds of soft green and reflected light, and I find them intensely relaxing. Ratty, from Wind in the Willows, is a creature that knows how to live life - he spends his days bobbing on his boat, taking in the sun, idling in the finest sense of the word! Rivers are deep veins of peace, that can help us to unwind. 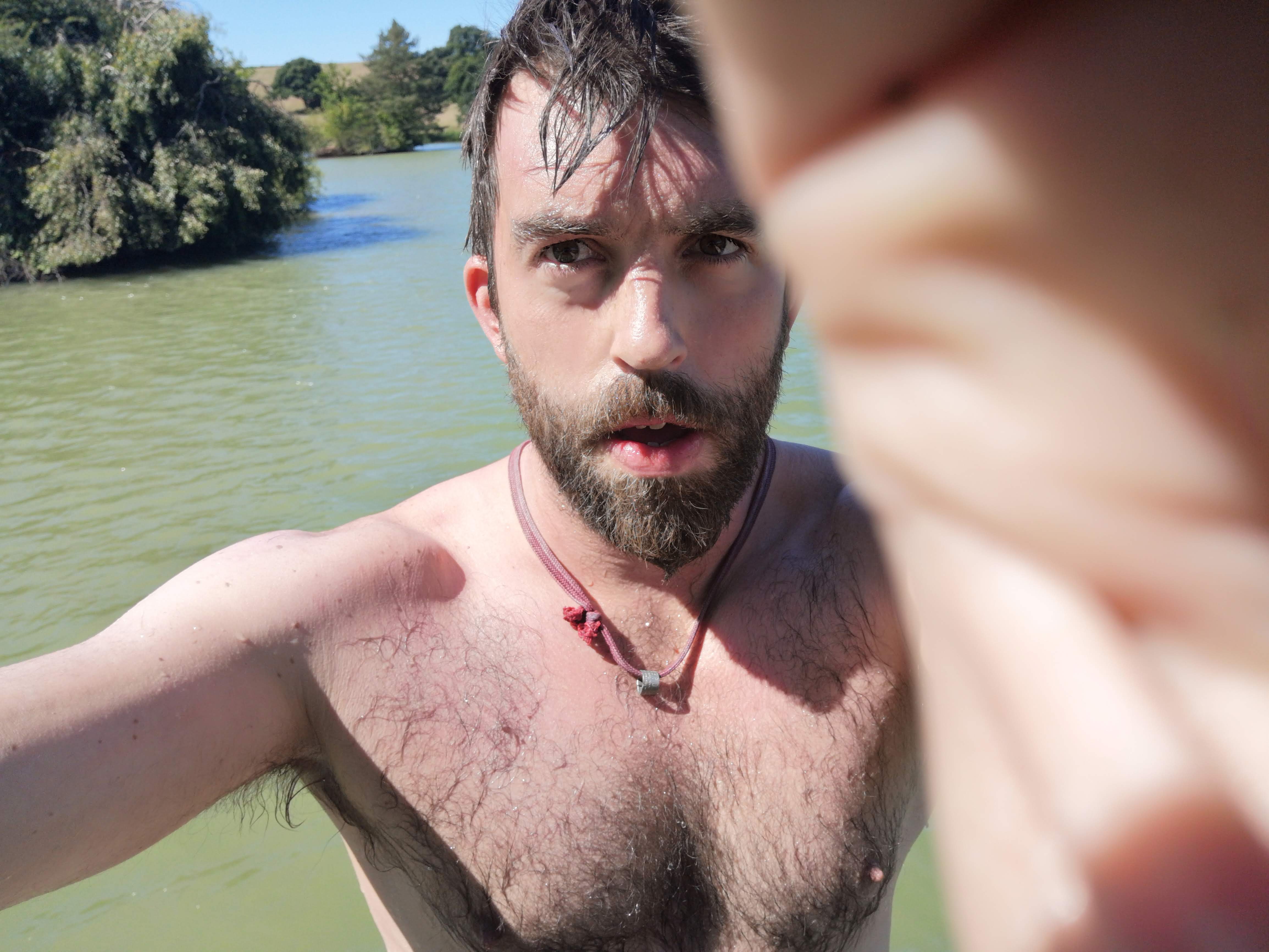 This interview is a longer version of an article that appeared in the Autumn 2020 edition of the Trust's Membership publication - the Journal. Photographs and illustrations courtesy of Nick Hayes.