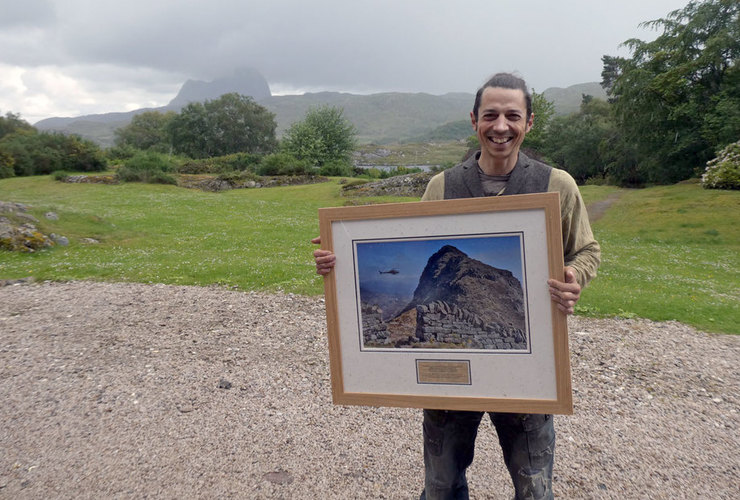 It all began back in 2015 when the outdoor clothing retailer Berghaus nominated the spectacular mountain, on behalf of the John Muir Trust and the Assynt Foundation, in a European-wide online poll to win £18,000 for repair work.

After Suilven won the competition – organised by the European Outdoor Conservation Association – the John Muir Trust spearheaded a major fund-raising effort that would eventually bring in £200,000 to restore the eroded and disintegrating footpath back to world class condition.

In the spring of 2017, the Trust – as part of the Coigach-Assynt Living Landscape Partnership and acting on behalf of the Assynt Foundation - began overseeing the extensive repair work from the summit right down to sea level.

It involved two contractors with strong local links to the north west Highlands working over two phases in scorching sunshine, howling gales and driving rain. Arran Footpath and Forestry focused on hand-built work on the steep ascent to the summit, including steps and drainage features, while  ACT Heritage transformed the boggy quagmire on the long approach stretch into a robust path that blends in naturally with the surrounding landscape. Hundreds of tonnes of stone was lifted in by helicopters, whose crew included Peter Clunas who was later killed in a tragic air crash.

Along the way the project was strongly supported by Everest mountaineering legend Sir Chris Bonington, who said: “The most magical walk I have ever known was on Suilven in 1952. I was still at school and I was climbing with a young undergraduate, staying in bothies, and we did this walk and climb humping all our gear with us. I will never forget that view looking south over Loch Sionascaig.” The release of the film Edie, starring Shelia Hancock, also raised the public profile of the mountain and gave a welcome boost to the fundraising drive while the repairs were underway.

Chris Goodman, who as footpath officer for the John Muir Trust was in charge of the work, said: “When we began the work the route was so boggy and waterlogged that I always had to walk out to the work site in wellies. By the later stages, a pair of trainers was sufficient.

“And a path that had begun to widen into an unsightly scar on the landscape, destroying surrounding vegetation, had been transformed into a robust, attractive path that feels good underfoot, looks natural and blends in with the surrounding landscape.”

On behalf of the John Muir Trust, the Assynt Foundation and the Coigach-Assynt Living Landscape Partnership, Rich Williams thanked the contractors for their outstanding professionalism, and all the other funders: the Heritage Lottery Fund, Scottish Natural Heritage, European Outdoor Conservation Association, the Scottish Mountaineering Trust and numerous members of the public.

“Without the support of these organisations and the generosity of thousands of individual donors we would never have  been in a position to undertake this work. Suilven is a fantastic natural asset in this part of the north west Highlands and the completion of this project will safeguard the route from the elements for many years to come.”

The ceremony to mark the completion of the repairs was attended by directors of the Assynt Foundation, and representatives of the Coigach-Assynt Living Landscape Partnership and the John Muir Trust, and by the project’s coordinator Chris Goodman who is now concentrating on developing his local woodcraft business, having recently stepped down from his former role.

Photo at the top shows Chris Goodman at the ceremony, with Suilven in the distance by Ross Brannigan.