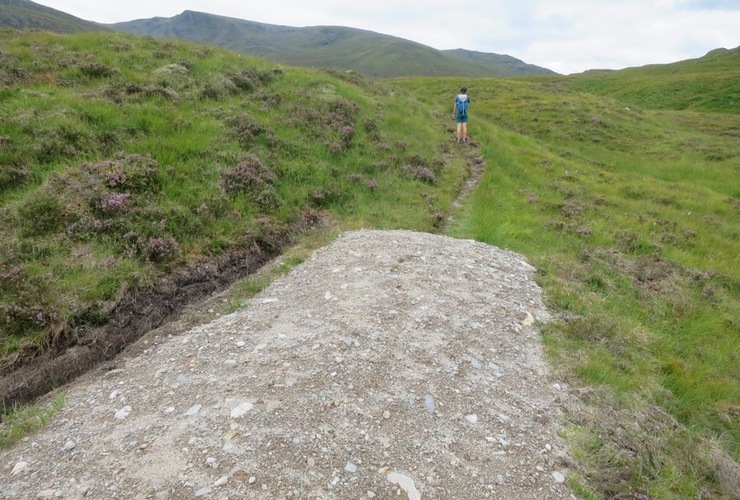 I’ve lost track, so to speak, of the number of times I’ve come round a corner or dropped into a glen on a hillwalk to be greeted by the startling sight of a new vehicle track. It can be a shock to the system. Is it so selfish to say that it can really spoil my day?

This photo – taken during a day out with my family in the Highlands last summer – has been used to help publicise the Scottish Environment LINK Hilltracks Campaign.

The campaign has worked tirelessly for a number of years now, along with Mountaineering Scotland and many other committed individuals and organisations, to increase awareness of the impact that tracks can have on the landscape, driving ever further into the heart some or our wildest landscapes. The Trust - concerned by the damage that tracks can cause to landscape, sensitive sites and the way we experience wild places - has played its part in that campaign. I haven’t been able to establish if the track in this photo was built according to the letter of the current law or otherwise but, either way, it’s a powerful image.  I have reflected on it often in recent months – even more so now we know the outcome of last week’s debate on the Planning (Scotland) Bill, which we hoped might mark a turning point in this long-running campaign.

I’ve heard the arguments for and against constructed tracks in the uplands many times and from a range of parties. And yes, a well-constructed track can ease my travel through wild country, but it’s not something I actively seek and I definitely don’t want to see tracks reach into all the hills I want to climb or the nooks and crannies I wish to explore.

Part of the appeal of getting to the hills and wilder places is the sense of getting away from it all, and the freedom to pick a route at random that brings us as close as possible to wild nature.  As the LINK campaign highlighted in a major report in 2018: “Some “road-style” tracks are built over the top of existing low-impact single tracks and informal paths, which had provided a more attractive, natural and enjoyable experience for recreational users.  Where tracks are built and become recognised routes into hills, this recreational use is a by-product of their original purpose.”

Some people reasonably argue that tracks can facilitate the work of mountain safety and rescue teams. Certainly, I’d be grateful if I, or any of my friends or family, were ever to be rescued swiftly thanks to a built vehicle track.  But this is no justification for a free-for-all leading to a dense network of tracks criss-crossing our uplands.  Where would that argument end? Would we want to build helipads on the tops of our mountains or paved roads accessible to ambulances across our wildest landscapes?

Yes, hilltracks can be a legitimate management tool when they are essential for genuine agricultural or forestry activities. Of most concern to the LINK campaign, however, are tracks which appear to be designed primarily to serve field sports but which it is claimed are for agriculture or forestry so as to qualify for Permitted Development Rights, meaning that they are not subject to the scrutiny of a full planning application.

So, with a new Planning Bill under discussion (over the past year or so), the LINK Hilltracks campaign has worked hard to make the case for tightening the current rules governing hilltracks to ensure protection of the environment and allow the public to have a chance to have their say in track proposals when they are notified to planning authorities.  As a result of the LINK campaign, more than 800 people have, over the past year, written to their MSPs to voice their concerns.  The Scottish Green Party has also been making the case for change, with Andy Wightman MSP leading a vigorous campaign which put forward changes to the Bill and led to 1,900 signing up and taking action.

The amendments proposed by the Greens sought to strike a balance. They did not seek to block all vehicle tracks but tried to close a potential loophole in the legislation to make it more difficult to construct tracks that are primarily for sport shooting and other field sports, as well as tightening controls on tracks in National Parks, battlefields and Sites of Special Scientific Interest (SSSI). As Andy Wightman highlighted:

“Many planning authorities are attempting to deal with the problem, but they do not have effective powers or the resources to do so. All that I am attempting to do is ensure that the process facilitates an informed decision that is subject to full public scrutiny. In many instances, the authorities would consent to the creation of tracks.”

All this adds up to a lot of letters to MSPs and a high profile for the campaign, which – along with widespread press coverage including on the BBC, WalkHighlands and UKHillwalking – pushed the issue up the political agenda.

Unfortunately, when it came to the crunch, our politicians stuck with the status quo. Kevin Stewart, the minister responsible for planning, acknowledged public disquiet over the issue. Yet the amendments were voted down 30-88 with a clear split along clear party lines: the SNP and Conservatives voted unanimously against the amendments, while the Scottish Green Party, the Liberal Democrats, Labour and the single Independent MSP Mark McDonald voted in favour.

After all the work that was poured into this campaign, the disappointing result provoked a vociferous backlash,  including outdoor personalities such as broadcaster Cameron McNeish, author Muriel Gray, long-distance walker Chris Townsend and world-class climber Dave MacLeod.

Where now? The Planning Minister made a commitment to reconsider the issue in the forthcoming review of the General Permitted Development Order (the secondary legislation which currently applies to agricultural and forestry tracks).  The LINK campaign will hold the Scottish Government to this pledge; as Helen Todd, co-convenor of the LINK Hilltracks Campaign and Ramblers Scotland Campaigns Manager said: This is about local democracy as well as environment and landscape protection.”

So, progress on some fronts – but much more to do yet.  Thank you to everyone who has supported the campaign to date.  Stick with us – the battle most definitely goes on.

What you can do:

If you come across tracks of concern you can help the LINK Campaign by taking photos and sharing these on social media using the hashtag #hilltracks and raising the issue with politicians, planning authorities and your fellow outdoor enthusiasts.  You can also send photos (give us grid references and any other relevant details) to hilltracks@scotlink.org

“It is worth reflecting on the fact that a short pathway to provide wheelchair users with access to a beauty spot requires full planning consent but a vehicle track bulldozed up the side of a mountain does not. It is time that that was changed.” Andy Wightman MSP

“These quite moderate and reasonable proposals would have afforded a degree of protection to our wildest landscapes and also introduced a much needed right for the general public to have a voice in these developments.”  Scottish Wild Land Group