Field Notes: What does climate change mean for Scotland?

The Trust's new Engagement Officer, Ross Brannigan, writes on how climate change is affecting Scotland's landscapes and our outdoor pursuits

Scotland is a wild and beautiful place. For as long as I can remember, I have been walking, climbing, running through its beautiful landscapes, often without a trace of human interference. That grandeur and ancient energy is my inner peace.

That peace is being shaken, though. Our behaviours are changing the places I love.

Like Egypt, Scotland has its own Sphinx. Unlike Egypt, ours is a snow-patch. In the last 300 years, the Sphinx Snow Patch has disappeared just six times. In 2017, Iain Cameron, an expert in snow patches, said the patch is now in its death throes. After changeable weather right through the past 18 months, can we expect more weather variations in years to come?

This variability has dangerous consequences. The Scottish Avalanche Information Service (SAIS), predicts such rapid snow to thaw fluctuations will result in an increased avalanche risk, putting in danger the lives of walkers and climbers.

Mark Diggins, co-ordinator at SAIS, predicts: “a more volatile weather pattern with extremes providing persistent snow pack weaknesses during cold phases. Perhaps there may be more erratic weather patterns within a winter but also from one winter to the next. This is challenging to forecast for and also for the public to gauge.”

For walkers and climbers, being able to rely on the snow you are walking on is crucial in the winter. With deep fluctuations in temperature, this could mean snow has hardly any time to consolidate.

One such place that has some of the highest avalanche rates in Scotland is Ben Nevis, where three climbers died earlier this year in a deadly avalanche in Number 5 Gully. The biggest of Scotland’s mountains, Ben Nevis (or The Ben) has a split personality.

Every year, 160,000 people will climb Ben Nevis. In summer, great pilgrimages take place up its main mountain path, sometimes taking washing machines and ironing boards to the summit (one man took a boiler to the top of The Ben and its sister peaks Scafell Pike and Snowdon). On the other side, though, lies a world of incredible ferocity and beauty.

Within the crannies of Nevis’ north face, ski-mountaineers, rock climbers and runners can be found snaking their way up Tower Ridge, Castle Buttress and the ominously titled Don’t Die of Ignorance climb, immersing themselves deep into the recesses among some of Scotland’s retreating wildflowers.

Assisted by the John Muir Trust’s Nevis Property Manager Alison Austin, The Nevis Landscape Partnership (NLP) produced a study showing how some of these rare and beautiful plants – like Iceland purslaine, snow pearlwort and Highland saxifrage – are retreating up and in to the mountain, seeking the consistent colder corners the Ben has to offer.

It isn’t just on Ben Nevis. Further south on Ben Lawers, the snow pearlwort is at breaking point; while on Mull, Iceland purslaine has been severely hit by warmer weather. It is easy to dismiss these seemingly small changes to our natural environment, but I don’t know any lover of the mountains who would ignore these signs.

The trouble is, with milder winter conditions, climbing in areas where mosses and flora lie can cause significant damage. At Glenridding Common, the British Mountaineering Council - with the Trust's support - (installed a thermometer) in the Red Tarn Face, because winter climbing on soft ground can damage the vegetation, instead of climbing when it is frozen.

“On top of ecosystem changes,” said NLP’s Iona Skyring, “one of our biggest concerns is the erosion of paths and the nearby parts of the land.”

The John Muir Trust, in partnership with NLP, maintains the walkers path up Ben Nevis, as well as its conservation efforts across the 4300-acre mountain. For Iona, it is the milder climate and sudden weather changes that can affect not just the snow, but the traffic to the hills.

She said: “There is a definite effect from sudden weather changes on soil and paths. Long dry spells, like we had in June [2018], followed by wet weather means soils cannot absorb water, and it can cause damage to areas of already eroded land.”

With potential extensions to the peak season due to milder winters, there will likely be increased traffic on the main path, which is something Iona and the NLP team are considering as part of the future management of the area.

“People should be aware of their impacts when enjoying the outdoors,” she added. “If people are coming to enjoy this area, they need to give back and consider the sustainability of their activities.”

If whole paths or rock features are eroded, it could result in landslips and changes in mountain terrain and topography, which leads me to one industry that is often overlooked in climate change discussions: cartography. 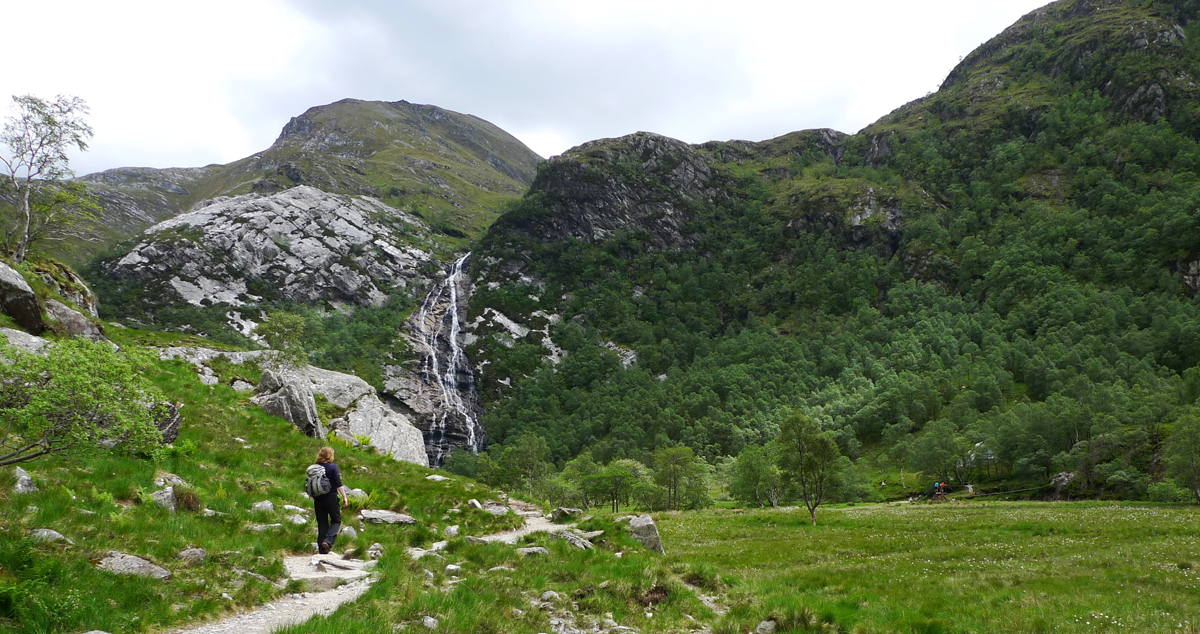 Harvey Maps has made maps for walkers and runners since 1977. Glacial melt has huge impacts on mapping, but here, it is rising seas which cause problems. The high tide lines on maps will have to be redrawn, meaning some paths affected by the tide could become more regularly submerged.

Nigel Williams, Harvey Maps ambassador, added: “Should sea levels rise then not only would those lines need to be recalculated and re-drawn, but every spot height on our maps would need to be changed. While contour lines would remain as they are, all the contour numbering on every map would have to be adjusted.

“Could Ben Vane become a Corbett? Will the Munro, Corbett, Donald and Marilyn tables all have to be re-written?”

Questions will only grow. Uncertainty is slowly becoming the norm for those close to the outdoors, and we have barely touched on wider bio and geodiversity questions.

What can we do? Many Trust members will be aware of or already make these steps, but when travelling to the hills, car share or take the train and cycle the rest of the way – it can open a whole new adventure.

We love to buy outdoor gear, but what could we reuse, repurpose or mend? When on the hill, stick to the main path where erosion is likely to occur. Take your litter and climbing gear home to stop it entering the rivers and harming wildlife.

Another thing you can do is support charities who are campaigning and working to protect (woodlands), peatlands and other wild places in Scotland in order that they can continue to tackle global issues at a local level.

The John Muir Trust manages property across the UK, seeking to inspire people to connect with the outdoors, while also striking a balance between tourism and the environment. The Trust recognises that, while we have to do a lot to protect our planet, restoring and rewilding can be hugely beneficial to protecting the places we love through carbon capture and (protecting path integrity).

Climate change will affect life in Scotland, for plants, animals and humans. How we ensure our outdoor pursuits are sustainable is critical to tackling the climate emergency.