Nevis conservation officer Nathan Berrie looks at the past, present and future state of the woodland in Glen Nevis

In the east of Glen Nevis rests the hidden Coire Guisachan (which translates as Coire of the Small Firs), with its steep, glacially-formed walls and meandering river. Gaelic speakers would be forgiven for imagining it to be full of Scots pine – traditionally referred to as ‘firs’ – but instead it is a treeless place as you can see in the picture above.

Oak for construction, Scots pine for fencing, hazel for firewood, birch for hand barrows, alder for roofing, ash for shinty sticks, bark for leather and the rest for charcoal – this is what became of Glen Nevis’ once rich native woodland. Add high numbers of livestock and deer to the deforestation and it is clear how Glen Nevis became a shadow of its former self.

^ Then and now: This early 20th Century photograph from Am Baile shows the track through a bare-looking Glen Nevis – in contrast to new native woodland that you will see there today.

Through the work of the current land owners and managers, Glen Nevis is being steadily reforested. Alongside the Nevis Landscape Partnership, the John Muir Trust has promoted the growth of native woodland to recreate habitat for red squirrel, pine marten and, potentially, Scottish wildcat, which once roamed the area.

^ Then and now: Early 20th Century tourists pass through Glen Nevis in this photograph from Am Baile – today their view would be filled with young native trees.

Fast forward to the present day though and this picture is changing. By reducing sheep grazing and managing deer numbers, Glen Nevis has a chance to recover. Already, pioneer birch communities have started to flourish. Patience is the key management tool in this form of rewilding. Humans instinctively look for tangible results and it is always tempting to plant trees. However, the current method in Glen Nevis takes a more philosophical approach which will yield results that take place naturally over the decades to come.

In time, Coire Guisachan may once again live up to its name. 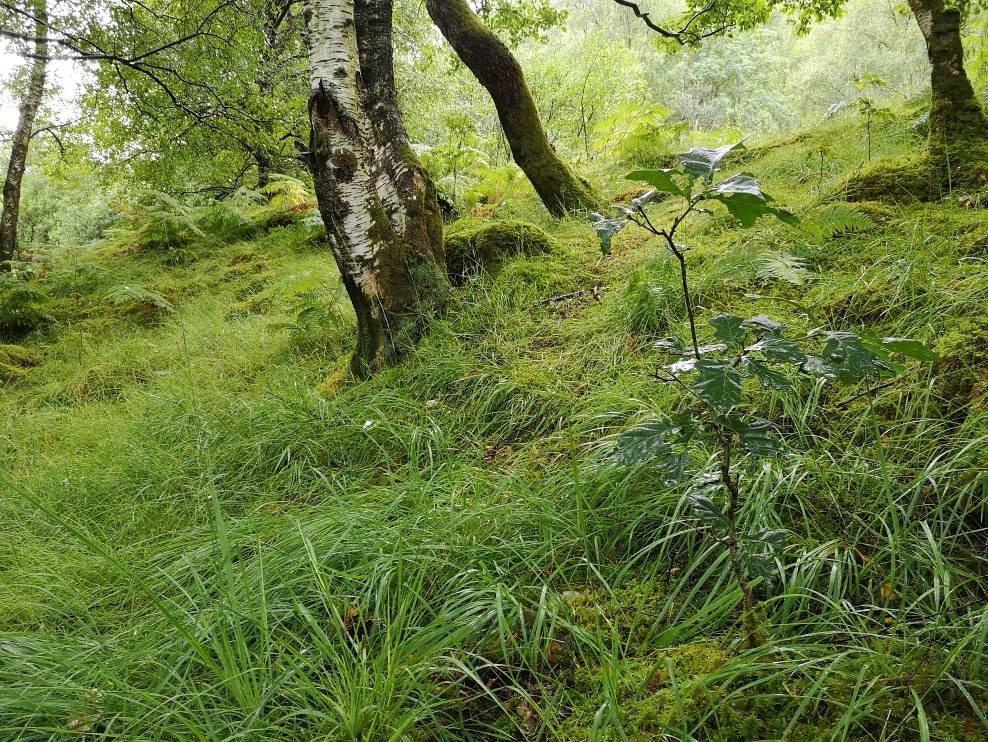 ^ Self-seeded oak among birch woodland near Steall Gorge – with no mature oak in this area, this seedling may be a result of squirrel activity.

(Nathan's role is funded through the ALA Green Trust. His blog first appeared in the Trust's (Journal 65, Autumn 2018) edition as part of a feature on ecosystem restoration. This online version includes Nathan's photographs.)