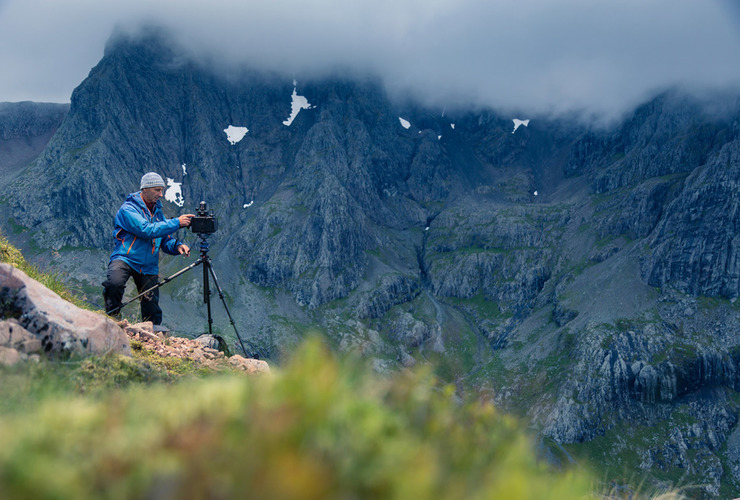 The John Muir Trust’s Wild in Me films celebrate the connections between people and wild places. (In the second film in the series), climber and photographer Dave ‘Cubby’ Cuthbertson talks about his deep affinity with John Muir Trust managed Ben Nevis, and the role that mountains and wild places play in his life both now and in the past.

Dave Cuthbertson has a place at the heart of Scottish Mountaineering. He made the first ascent of Wild Country on the Cobbler in 1979, regarded as the hardest Scottish route of the time (E5, with a pre-placed nut). In 1983, he pushed the envelope again, making the first free ascent of Requiem on Dumbarton Rock, a wild place within sight of Glasgow’s heavy industry. This route was subsequently graded at E8, setting a new benchmark in Scotland and beyond.

“Around the turn of the century Cubby was Scotland's finest all-round climber. He put up many new routes in Scotland on both rock and ice. Cubby is rich in natural talent. A search for perfection powered his climbing and his writing, and now powers his photography,” says Cameron McNeish, Scottish Outdoors writer and broadcaster.

Cubby went on to create many new winter routes like Stormy Petrel on Ben Nevis and The Duel in Glencoe. He’s now a photographer, safety adviser and the patron for the Fort William Mountain Festival.

Mountaineering historian and ex John Muir Trust Trustee Ken Crocket has very kindly contributed an in-depth piece on Cubby and his contribution to climbing culture, which is posted on the UK Climbing website.

“There is no superstar mentality with Cubby – he’s a good, kind guy. He is one of the most impressive climbers in the history of Scottish climbing. His boldness, ability and vision for new routes at the top grades are legendary. He’s not only a great ambassador for climbing, but also as a person. He has never changed and is incredibly talented as a photographer, painter and writer.” says David ‘Heavy’ Whalley, Ex- RAF Mountain Rescue.

(Watch The Wild in Me: Dave Cubby Cuthbertson)