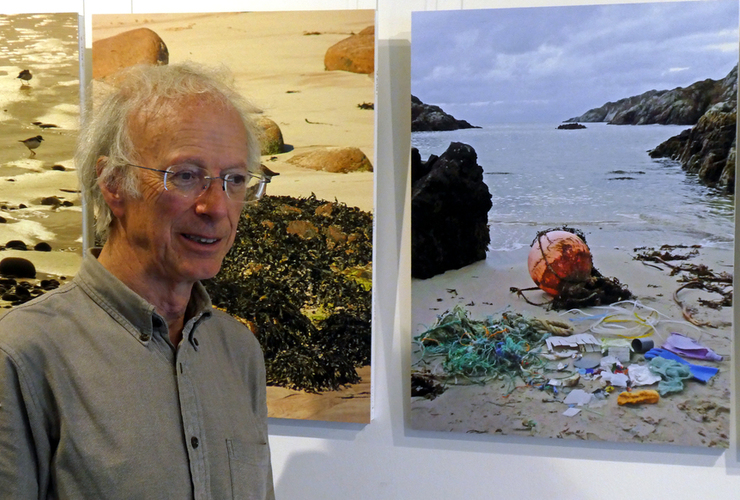 Back in 1983, Denis Mollison became member number one of the John Muir Trust after founding the organisation with three others. The Perthshire organisation has since grown thousands of times over with members across Scotland, England, Wales and further afield.

A professor of applied probability in Edinburgh, Denis’s passion for the wild places of Scotland remains undiminished, and he spends much of his time in Assynt, observing and photographing the land and seascapes. This new exhibition, which will run at Pitlochry’s Wild Space visitor centre from 20 July to 2 August, chronicles the subtle complexities of dozens of lonely beaches across the North West Highlands Geopark.

“These photographs explore the beaches through their elements and details,” says Denis. “They focus on water, light and stone and the creatures who live on and around the shoreline where the ocean refreshes and reshapes the land’s edge twice a day.

“For this collection, I concentrated on the 40 beaches of the southern half of the North West Highlands Geopark, around Assynt and Coigach. A few are well-known, but many others are remote and seldom visited, including some very beautiful ones that only appear at low tide.

“Each tide wipes a beach clean of footprints and sandcastles, leaving instead seaweed, shells driftwood – and, alas, plastic. And the beach is then freshly sculpted by water into pool, channels and intricate flow patterns. Meanwhile, beneath the sand and on the rocks, a wide variety of living creatures harvest what the water has brought in, attracting the birds that feed on them including gulls, oystercatcher and ringed plovers.”

He says that every visit to a beach is different, as the sun, rain and clouds bring endless variations of light and reflections to the edge of the ocean. But as well as being an expression of love for these wild, storm-lashed shores on the fringes of Europe, the project also looks at the problems.

“Many beaches now have significant quantities of litter, which on this coastline is mainly discarded rope and other items from boats,” says Denis. “These items often accumulate among the cobbles and seaweed around the high tide mark. Not all litter is so visible, so I have also collected sand samples that are currently being analysed for evidence of microplastics.”

Portraits of the Edge will run at the Wild Space visitor centre every day except Wednesday. 10am -5pm