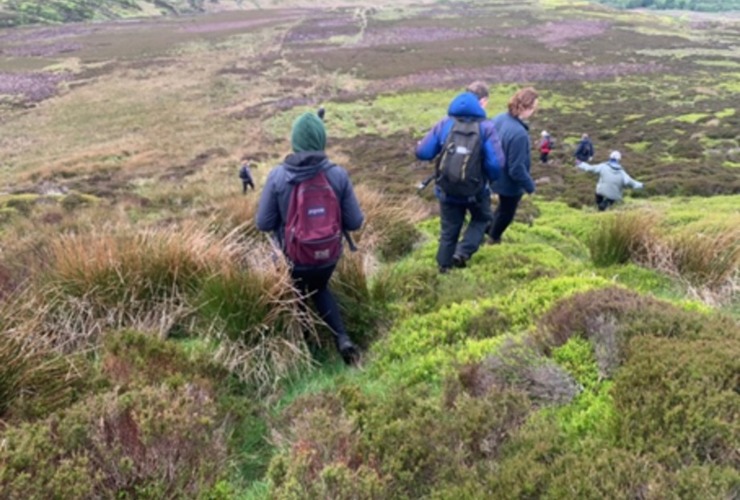 The Wild Law* weekend is hosted by the UK Environmental Law Association (UKELA). The weekend is aimed at promoting an understanding of Wild Law and the legal relationships between people and nature, through the fostering of discussions regarding concepts, attitudes and initiatives.

The aim is to gain a greater understanding of how the law can be used to improve the natural environment and how law can be better aligned to the benefit of ecology and the science of living systems. Currently, law and governance place human beings central with nature a secondary consequence of actions, which has led to the ultimate exploitation of nature as a resource to be consumed.

In late May, I headed to Robin Hood’s Bay, Whitby, and the North York Moors National Park with 22 other people. We were immersed in the natural environment so we could more fully understand the issues pertaining to wild places and develop of more creative ways of connecting nature with law.

Conservationist John Hunt, kicked off the weekend by explaining the grave issues that currently face seabirds and other marine life.

The importance of the ecology of the North Sea to the health of bird and marine species is well known, yet the fragile balance of the ecosystem is being threatened by bottom-trawling, electric pulse trawling, dredging and over-exploitation by the fishing industry. Sand eels, which are a staple in the diets of many seabirds, are being caught in unsustainable numbers on the Dogger Bank to be used as fertiliser and feed for fish farms. John also discussed the controversy surrounding recent developments of offshore wind farms and their implications for seabirds affected by collision with turbine blades and the further loss of feeding areas.

Next we headed along the coastline to Flamborough Head, a designated Special Area of Conservation and home to the UK’s oldest lighthouse, built in 1669. A walk over the sea-cliffs from Flamborough to Bempton provided a stunning backdrop as we continued our discussions with John about the conservation of seabirds. The cliffs boast one of the largest seabird nesting sites in England, with around half a million gathering between March and October, including an impressive colony of gannets whose numbers are now steadily increasing.

Slightly sunburnt, completely windswept and invigorated, in our hostel that evening we were treated to a talk by Sir Crispin Agnew (QC) titled ‘Sustainable Development, The Right to Buy and Rural Development’. The legal context of sustainable development was explained as Crispin pointed out the various descriptions that have appeared in Scottish legislation over the years.

These legal topics are relevant to the work of the John Muir Trust and led to interesting discussion about parallels between some rural development projects and the legal conundrums of ‘sustainable’ definitions and the community ‘right to buy’.

To further reinforce the wonders of nature and why we are defending our countryside, we rounded off the weekend with a hike over a moor. This was a beautiful place with sweeping dale views (in the right weather conditions!) that takes in the source of the River Esk. We used this time to discuss many of the issues affecting the National Park, such as the poor condition of the 58 Sites of Special Scientific Interest and the land ownership and tenure.

Passionate discussions arose with every mile walked as we came face to face with the environmental effects of managed, rotational burning of heather moorland by private estate owners that use the land primarily for driven grouse shooting. We debated the effect on biodiversity; peat-lands and carbon stocks; the effect on water; the ugly burn marks in the hillside; the persecution of birds of prey and the sensitivities of the local communities.

We debated land use by the largest landowner - Forestry England - which has planted vast quantities of conifer plantations since the establishment of National Park status. And we also discussed various farming practices, the effects of tourism, fishing and shooting and began to fully understand the implications of Wild Law on the coast and countryside.

All in all, it was a stimulating and tiring weekend full of relevant discussion, exhilarating scenery and great company!

*Wild Law was first coined by the lawyer and author Cormac Cullinan to describe a holistic approach to law and governance with an approach based on principles of ecology; “that all of life is an interconnected web of which human beings are only a part.”