The past few days of lockdown at Sandwood have seen the return of colder weather, with heavy rain, hail and even snow showers making last week’s evening barbecues and sunbathing feel like a distant memory. The peas and beans planted so optimistically last weekend are now hiding under fleece blankets. After a very wet morning and afternoon, the sun finally breaks through and I take the opportunity to head out for a short walk between the showers.

The cliffs to the north of Sheigra can be one of the most dramatic places to wander or sit, especially when stormy weather batters the waves against the rocks and you can taste the salt as you breathe the air. At this time of year the cliffs are especially important for breeding fulmars and other seabirds, and are an interesting place for a little bit of botanising.

The first thing I notice since my last visit is the sudden pink profusion of moss campion. This ground-hugging plant is an alpine species, found more commonly in high mountain environments in the UK, but which can be found growing near the sea in the far north. In rocky patches near the cliff edge, the white flowers of sea campion have also started to appear.

Frequent bright green hummocks are one of the first tell-tale signs that the faint track I’m following is an otter trail. On closer inspection, each of these hummocks is adorned with a scattering of fish bones and scales – the remains of otter spraint. Otters leave spraint on prominent features such as grassy mounds and rocks to mark territories, and as a way of communicating with other otters. The vivid green of the hummocks is due to higher nutrient levels, gained over years of being used as a spraint site.

Looking out to sea as I continue along the trail, I see two grey seals in a turbulent position just off the rocks. The fishing must be good there as they’re a reliable sight in that spot. I look up as a great skua, or bonxie as they’re commonly called here, passes overhead. These birds are known as the pirates of the sea for good reason. They’re notorious for harassing other seabirds into giving up their catch, and will quite readily kill other birds. I’ve heard accounts of bonxies drowning birds as large as geese, and even a heron in one instance, while horrified onlookers watched helplessly from the shore. Despite this, their fearless personalities and intelligence have earned them a top spot among my favourite seabirds.

Looking back down at the small world at my feet I see the first flowers of birds-foot trefoil mingling with the dainty bright blue of milkwort; a living bouquet!

I follow the otter trail as it crosses bare rock to a small freshwater pool (shown in the first photo), an essential feature on a coastal otter trail. Otters have extremely dense fur, having no blubber to keep them warm in the water, and will spend twice as long grooming in coastal environments as they do in freshwater environments due to the need to remove salt to keep their coats in good insulating condition.

While admiring newly-opened heads of thrift, and yellow roseroot flowers clinging to the steep rock faces, I’m surprised by the sudden alarm call of an oystercatcher almost beneath my feet. A nest, perched precariously above the crashing sea below! I hurry away from the cliff edge to allow it to return, and come across purple saxifrage just coming into flower, another alpine species at home in this northern coastal environment.

The otter trail has become impossible to follow now, as the grass gives way to smooth, bare slabs of Lewisian gneiss. The geology along this section of cliff is fascinating, where this kilometre-wide band of gneiss meets the sea. The Torridonian sandstone cliffs in this area are eroding rapidly (geologically speaking), with huge blocks tumbling down to meet the waves, but the three billion year old gneiss is much harder and erodes more slowly. The scene is littered with sandstone glacial erratics.

This section of cliff is known as 'Second Geo' and is famous among climbers who come to challenge themselves on the sheer rock face, on routes with names such as 'Bloodlust Direct' and 'Geriatrics'. ‘Geo’ is a word derived from Old Norse, meaning a deep and narrow cleft in the face of a cliff, carved out by the sea.

I’m afraid my adventurousness stops at the cliff edge, and I make my way back over the ridge and down towards the beach, stopping to watch a dunlin as I go. 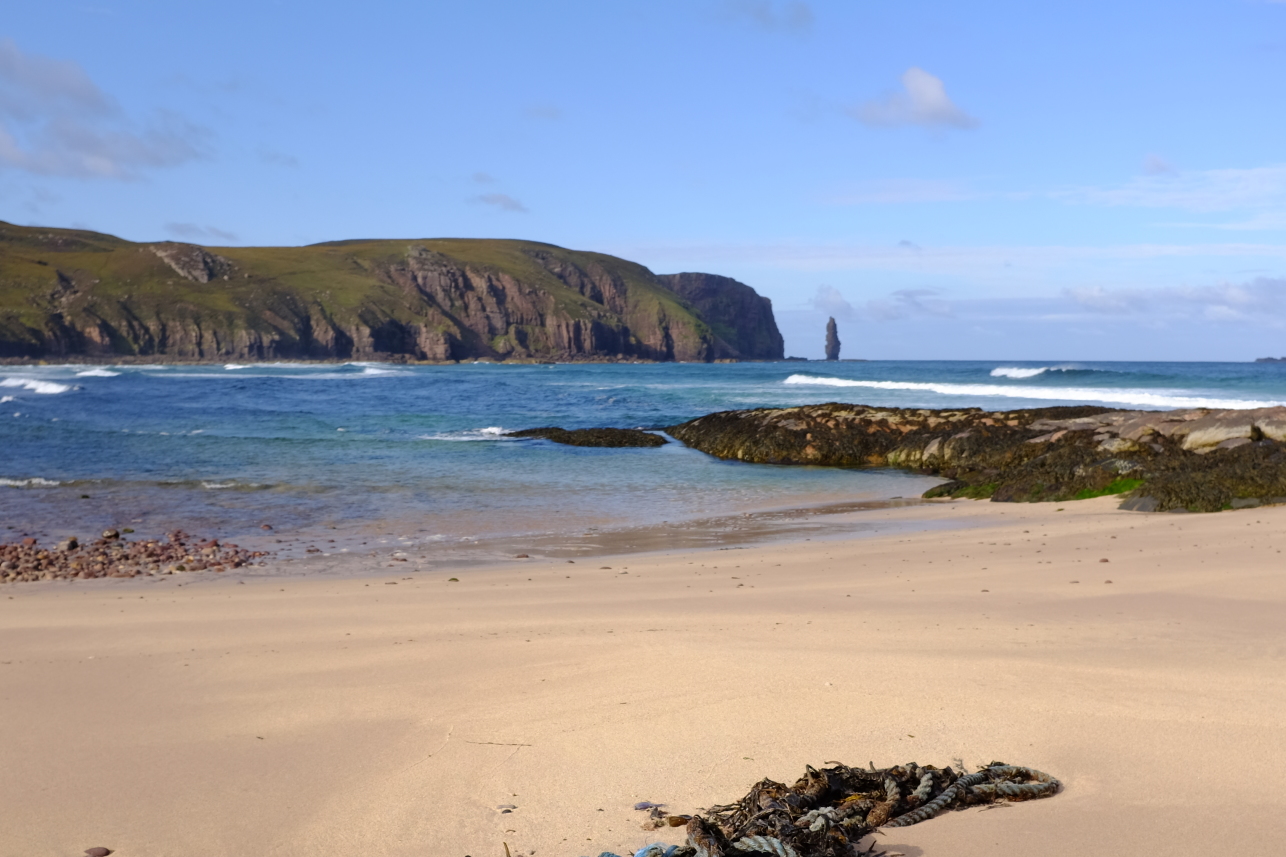 Help care for our spectacular coastlines

Find out more about our work at Sandwood